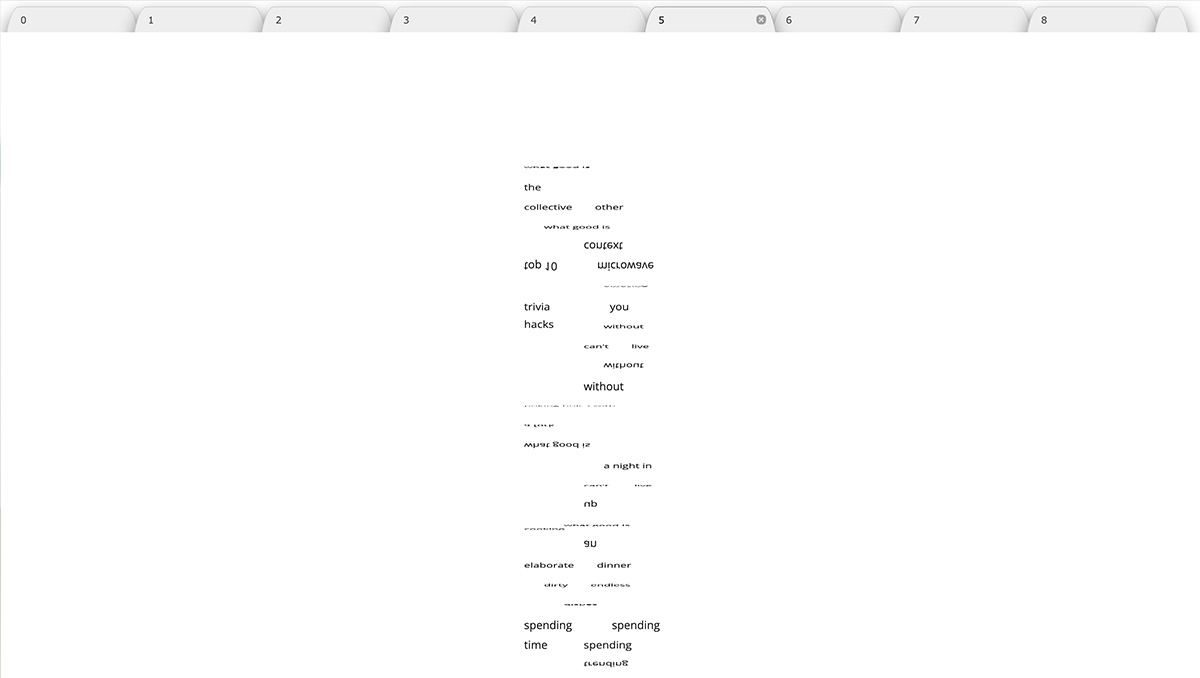 Attention is focused directional mental presence. Whatever we point our attentions at becomes part of us, and collective attention confers cultural prominence. Over time our attentional objects become, to borrow a phrase from Robert Coover, the furniture of the world.

In The Attention Merchants, Tim Wu describes the history which led to the 20th-century dominance of the attentional economic model, which we endure (like uncomfortable furniture) as a kind of regressive cognitive tax. With so little land left to exploit, capitalism rapaciously colonizes mental space as if pursuing manifest destiny in a new New World.

Attention from others is the Californian gold of our time. It is valuable and powerful both in actuality and as a seductive idea, as potential. The prospect of attentional validation beckons from the digital sunset. We feel its pull even if not actively chasing it. Meanwhile, crypto and NFT ads flicker on the sidebar. The genius of the blockchain is not technical, but conceptual. It is an economic MacGuffin, a smoky black box. Its only proven use is as a catalyst for superficial, uncritical attention, which drives investment, which leads to more attention. It is an attentional circular reference, a memory leak. There is nothing in the box.

And here is the locus of individual acts of attention. Microscopic mechanisms, movements of the eye and mind. All aggregated attention stems from tiny behaviors. Response to stimuli or memory, local determinations about what is worthwhile (or necessary, or endurable) to pay attention to, and for how long. Each attentional act is one of generosity, care, and hospitality, even as it is nudged, manipulated, or gamed. Ocean Vuong in The Creative Independent:

The statement is true both ways. We’re always paying attention to something, it is the most common activity of our lives, but the amount of attention anyone has, and especially the amount of close attention, is frustratingly limited and zero-sum. Its scarcity, of course, is why it is a commodity.

I often think of the dictum "to attend to anything is to fail to attend to every other thing." Perfect attentional responsibility is impossible. So maybe don’t feel so guilty about not texting back? But the adage also reads as a reminder of the weight of every attentional decision. To read anything (this text, say) is not to read some other thing. How much time does this reading require? Is it worth it? With so many obligations, so many catastrophes, so many people deserving of care, so many neglected relationships, and especially with how exhausting this all is, how do we make attentional decisions (which are only partially consciously controllable in the first place) and live with them? How could we ever give enough of our attention to any person or project or problem? What could "enough" even mean?

As a failed answer to these questions I present this little chapbook of kinetic poems, bound as a set of in-browser browser tabs. In terms of "performance" I am thinking not of staging or liveness, but of the action or process of carrying out a task. Hardware or software performance. How, and crucially how well, a process functions. These poems explore the mechanics and ethics of attention in a world of distractions, both internal and external.

But conceptualizing aside: they're just poems. Visual language music. Like all written poems, kinetic or not, they are also performance scripts. They lie inert until attention animates them.

Ian Hatcher is an artist, writer, coder, voice actor, and performer. His output includes a poetry collection, Prosthesis; several records and chapbooks; and a conjoined artists' book and mobile app, Abra, co-created with Amaranth Borsuk and Kate Durbin. His parafictional lectures and sound poetry readings have been presented widely in North America and Europe. He has taught at Brown, NYU, Rutgers-Camden, and the University of Bergen, and was selected as a Fulbright Scholar to Norway in 2021-22. As of 2022 he is an IAWP doctoral student at the University of Colorado-Boulder. ianhatcher.net